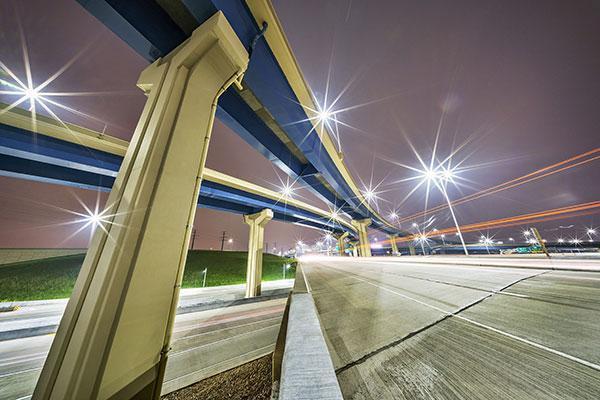 Chances are if you have been to Milwaukee you have driven through the Zoo Interchange. It is the gateway to all that makes Milwaukee famous with arterials leading to entertainment, businesses, and homes. Innovative when the interchange was built in 1963, by 2003 it was not meeting the traffic needs and safety expectations of the changing city. A massive reconstruction was analyzed, planned, designed and constructed by thousands of people. It takes a village truly applies here. Kapur & Associates is proud to be an integral part in the successful reconstruction of this prominent junction by performing a full range of engineering services for 15 years. The team, as part of a joint venture helped gather data to kick-off the project, they analyzed its impact, designed alternatives, and supported the construction team. For their contribution, the project, the Wisconsin Department of Transportation, and Kapur & Associates were just honored with a 2019 ACEC Engineering Excellence Best of State Award.

Kapur’s involvement in the reconstruction of the Zoo Interchange, where I-41/I-94/I-894 connect, began in 2004 with data gathering tasks and surveying. Team members collected utility system maps, verified field locations, and then created geocoded linework for electronic base files. They reviewed the existing conditions from shoulder widths to vertical clearances to pavement cross slopes to mapping major drainage areas and boundaries. Kapur experts then built a Geographic Information System (GIS) database to house all the information. This served as the foundation and hub for all critical project information for the next ten years. With a simple query, planners and designers had access to accurate information such as bridge numbers with links to original plans, rehabilitation work performed, and structure inspection ratings making their jobs much easier.

With the GIS data collected, the next step was analyzing the impact of the reconstruction on the environment. The Environmental Impact Statement (EIS) summarized existing conditions as well as the alternatives and their potential impacts. With a massive reconstruction covering a 565-acre footprint, there are many factors that had to be considered to accommodate increased traffic and ensure safety. It is not easy to find a solution with the least amount of impact on natural resources, personal property, and everyday traffic during construction. The importance of reviewing and analyzing all scenarios can not be underestimated if the project is to be a success in the long term. Working with WisDOT and other consultants, Kapur created multiple spot improvement and modernization alternatives for high-capacity service, such as Texas U-Turns and Single-Point Urban Interchanges (SPUI). These solutions increase traffic flow, improve safety, and reduce right-of-way needs.

At this stage, the GIS database became valuable to the real estate professionals planning for fee right-of-way acquisition and temporary easements. Registered land surveyors from Kapur worked with designers and WisDOT real estate staff, creating four traditional right-of-way plats for a total of 455 parcels so the department could obtain the necessary land interests prior to construction.

One of the most important aspects of any high-profile project is sharing information with the public in real-time and addressing their questions, concerns, and feelings. Kapur led all public involvement tasks, including hosting meetings with local officials and the public regarding the project’s design and establishing advisory committees to identify key stakeholders and their concerns.

After data was gathered and analyzed, impacts assessed, and alternatives considered, the design work began in 2010. Kapur’s engineers helped design more than 25 Zoo Interchange construction projects, all built on time and within budget. Transportation engineers contributed to the freeway geometric designs for two core system interchanges totaling more than $500 million in construction costs. They also were responsible for providing special provisions, specifications, cost estimates, and bidding documents for several high-profile adjacent arterial roadway designs such as the eight-lane expansion of STH 100 (Mayfair Road), the freeway modernization of Watertown Plank Road, and the improvement of STH 181 (Glenview Avenue).

Particularly challenging was maximizing the efficiency of the proposed free-flow, high-capacity interchange at Watertown Plank Road. The local street traffic on Swan Boulevard was disconnected from the interchange which meant reconfiguring the Milwaukee County DPW yard. The Kapur team developed architectural, structural and electrical plans and specifications for two storage buildings, a salt brine building with six tanks, 12 reinforced concrete storage bins, and a 20,000-ton salt dome with a conveyor system. Kapur’s site design team also designed the landscaping and decorative fencing for the new park-and-ride lot. The result accommodated the adjacent high traffic volume interchange and provided much needed aesthetic and functional enhancements for the DPW’s facility.

Along with traffic flow, another important consideration is water flow. The entire Zoo Interchange drainage design and stormwater management solutions were led by Kapur. This work incorporated more than 3,000 manhole and inlet structures and included the development of nine stormwater management facilities ranging from wet detention ponds, dry detention basins, and eco-depressions needed to meet water quality and TSS removal requirements. Kapur created advanced utility contracts to place encased water main and sanitary sewer facilities under the freeway prior to major construction. In addition, Kapur utility designers provided plans for a new water booster station along Adler Street for the City of Milwaukee and a temporary water booster station along Burleigh Street for the City of Wauwatosa. 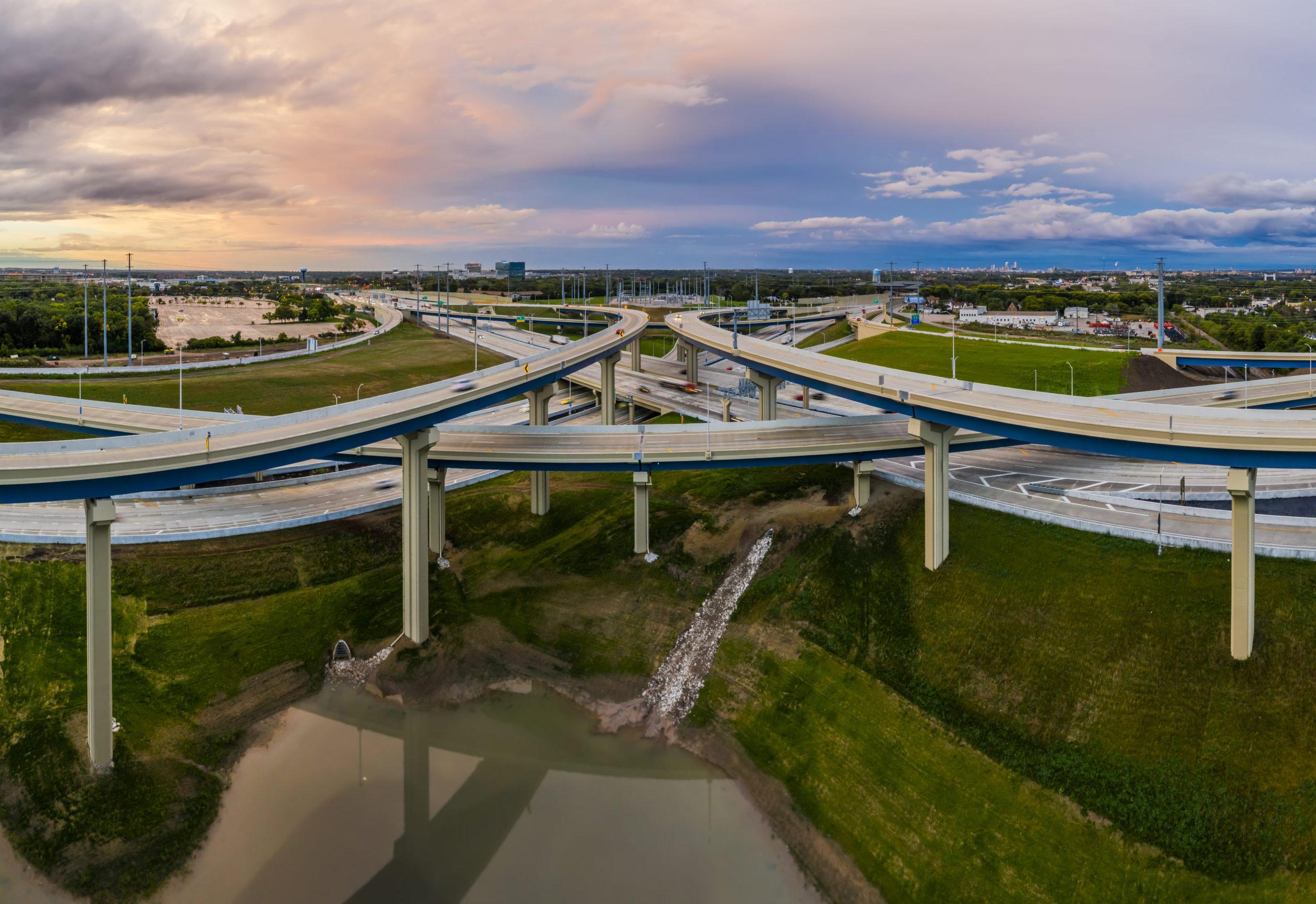 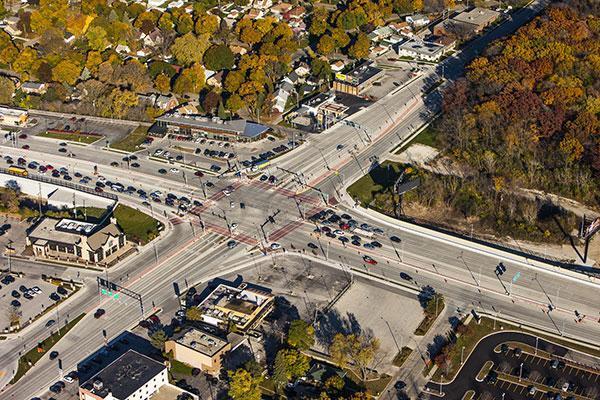 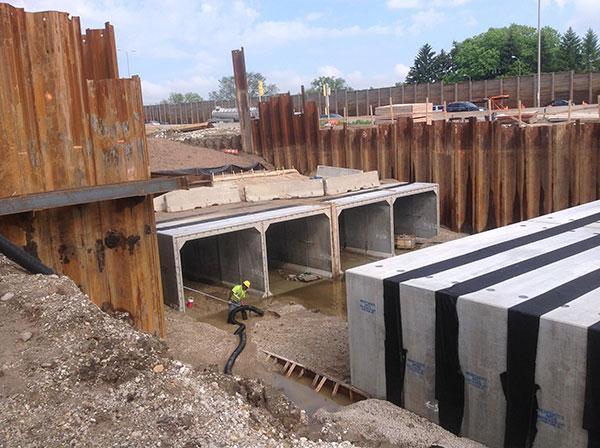 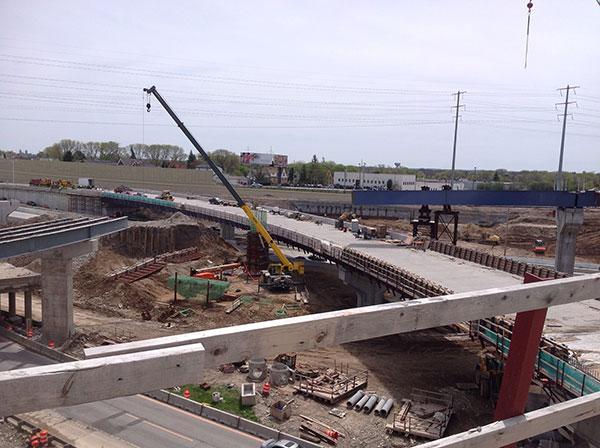 As major construction projects begin in 2013, Kapur provided a full-time engineer to serve as the design liaison for the next six years. Key responsibilities included post-design support and communication between all team members, stakeholders and regulatory agencies. Ultimately, this Kapur engineer oversaw the delivery of more than 30 plan revisions for field changes and adjustments. This fast-paced project had a maximum daily production rate of $1.2 million so it was imperative that the design liaison respond to project leaders with accurate feedback and correct information for timely decision making.

The Zoo Interchange was one of the first WisDOT projects to use a 3D Automated Machine Guidance (AMG) model to manage its complexity. The result was better plans with fewer errors during construction. Kapur provided a full-time 3D modeler/CAD technician to assist with construction staging changes, slope grading, excavation below subgrade, and temporary overhead clearances. The AMG model allowed the construction management team to anticipate and solve problems before they became issues in the field.

Through six years of major construction, the project team built public trust by meeting all scheduled milestones and provided safe access to the businesses that needed to remain open such as the Milwaukee County Zoo, the Milwaukee Regional Medical Center, and State Fair Park. In fact, the State Fair reported record attendances during construction and the Pettit National Ice Center held the United States Olympic speed skating qualifications without disruption.

The ACEC Engineering Excellence Award is a well-deserved honor for the team at Kapur & Associates and their partners. We are extremely proud to have been a participant in this project at the heart of Milwaukee’s transportation system. Their proactive approach, targeted expertise, and long-term commitment supported the entire team and community in the reconstruction of this critical junction.

Next time you are driving through the Zoo Interchange on your way to one of Milwaukee’s fantastic attractions, think about all the dedicated professionals, the innovative technology, and pride that went into its modernization. The roads that lead to all that makes Milwaukee famous have quite the story too.

Blog | By Jeff Sobczak
The first Kapur Smart Cities Webinar focused on wastewater and water and the application of real time sensors. Our speakers focused on the role of real ...